From Multiprocessing vs. Threading in Python: What Every Data Scientist Needs to Know

In CPython, the Global Interpreter Lock (GIL) is a (mutex) mechanism to make sure that two threads don’t write in the same memory space.

Basically “for any thread to perform any function, it must acquire a global lock. Only a single thread can acquire that lock at a time, which means the interpreter ultimately runs the instructions serially.” Therefore, python multithreading cannot make use of multiple CPUs; multithreading doesn’t help for CPU-intensive tasks, but does for places where the bottleneck is elsewhere - user interaction, networking, etc. Multithreading works for places w/o user interaction and other bottlenecks where the tasks are CPU-bound, like doing stuff with numbers.

Tensorflow uses threading for parallel data transformation; pytorch uses multiprocessing to do that in the CPU.

TODO - why does Tensorflow do that?

Both pictures from the same article above1: 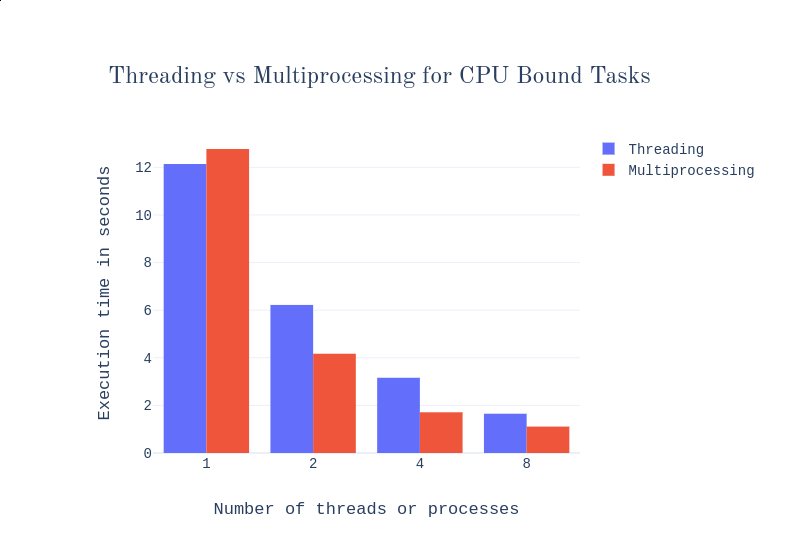 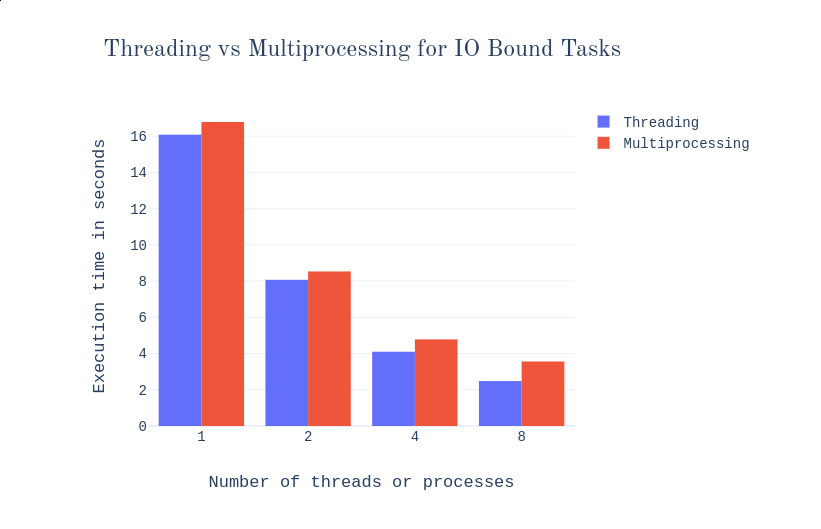 From Python Multi-Threading vs Multi-Processing | by Furqan Butt | Towards Data Science:

Concurrency is essentially defined as handling a lot of work or different units of work of the same program at the same time.

Doing a lot of work of the same program at the same time to speed up the execution time.

Parallelism has a narrower meaning.

Python - concurrent.futures for multithreading and multiprocessing

This would create a thread for each element in iterable.

More about it, as usual, in the docs:

The asynchronous execution can be performed with threads, using ThreadPoolExecutor, or separate processes, using ProcessPoolExecutor. Both implement the same interface, which is defined by the abstract Executor class. 2

Does concurrent.futures have any tradeoffs compared to doing multiprocessing.Pool() like the following?

Parallelising Python with Threading and Multiprocessing | QuantStart has a nice point:

Both user and sys approximately sum to the real time. => No parallelization (in the general case). After they use multiprocessing, two processes, real time drops by two, while user/sys time stays the same. So time on CPU per second is the same, but we have two CPUs that we use, and we get real time benefits.

real: the wall clock time. user: the process CPU time. sys: the operating system CPU time due to system calls from the process.

In this case the wall clock time was higher than the CPU time, so that suggests the process spent a bunch of time waiting (58ms or so), rather than doing computation the whole time. What was it waiting for? Probably it was waiting for a network response from the DNS server at my ISP.

Important: If you have lots of processes running on the machine, those other processes will use some CPU.

Directly copypasting from the article above, “CPU” here is “CPU Time” (so user in the output of the command), second is “real” (=wall; real-world) time.

If this is a single-threaded process:

If this is a multi-threaded process and your computer has N CPUs and at least N threads, CPU/second can be as high as N.

A bit more about cpu time