My custom keyboard layout with dvorak and LEDs

My keyboard setup has always been weird, and usually glued together with multiple programs. Some time ago I decided to re-do it from scratch and this led to some BIG improvements and simplifications I’m really happy about, and want to describe here.

Context: I regularly type in English, German, Russian, Ukrainian, and write a lot of Python code. I use vim, qutebrowser, tiling WMs and my workflows are very keyboard-centric.

TL;DR: This describes my current custom keyboard layout that has:

and is available on Github.

How I got into custom keyboard layouts

First, one long summer, I switched to the Dvorak keyboard layout2 and loved it.

Then I saw xkcd’s Randall Munroe’s Mirrorboard: A one-handed keyboard layout for the lazy – xkcd. The idea is that it’s easy to repeat with your left hand movements that you do with your right if they are mirrored. This works for blind typing too - if you type l with your right pinky finger, probably your left pinky finger ‘knows’ that reflex as well.

I loved the idea. My right hand usually has either a mouse or a cup of tea in it, and casual left-hand typing without needing to learn an entirely new layout sounded really interesting.

I decided to create such a mirrored layout for Dvorak.

This led me to the topic of customizing xkb keyboard layouts (the Arch wiki describes it very well).

At the end I did create a Dvorak Mirrorboard layout and used it more than expected (for example, image editing is easier if you don’t need to move your hand from the mouse).

But almost immediately I realized the potential of editing layouts and started to add things I needed, like Enter/Backspace, ümläüts and ß etc. - still mirrored, but now not a generic layout anymore. Needing a new name I decided on Pchr8board.

There were N iterations, here’s an old post about one of them: Pchr8board - a mirrored left-hand keyboard layout for Dvorak - serhii.net.

Then I kept adding stuff, in the process abandoning most left-hand features. Slowly we converged to a layout I liked.

I had other non-standard changes I was really attached to:

It all worked but not flawlessly

All together the setup was a net positive, but was very brittle.

Xcape is clearly abandoned, and neither xmodmap nor xcape work in Wayland. But there are far worse problems.

You need to run it manually on startup (could never get it to run automatically in a reliable way, believe me I tried) and every time you connect a new keyboard.4

Sometimes it took multiple attempts to get all parts working. And every time you run xmodmap it resets your layout and you need to re-run setxkbmap.

Not a hypothetical scenario

…Which you may not be able to do, because you’re stuck with a broken layout or Caps Lock on or a Ukrainian layout and no way to change it, because you can’t open a terminal and type a command to do that.

Also all the WM keybindings relying on the former Ctrl key are broken in the process.

You can GUESS where the Alt key is now and then try to get into a tty. Then your Ctrl and Esc are not where you are used to.

Long story short - it was worth the pain, but the pain was there. The setup was band aids on top of other band aids, some applied at the very beginning when I had no idea what I was doing but hey, it works.

One keyboard layout to rule them all

Then I finally did it all from scratch and for real.

The layout in all its glory

Only the changed keys are labelled, with the exception of the default characters when they help me to identify a key.

The key change is that the Left Alt button becomes a modifier key that makes more symbols/actions available. “Latch” is <Level3> and is located on Left Alt5.

For example, to get Ä you press <Shift+Latch+a>. For ä you just press <Latch+a>. A needs only Shift.

In the layout definition itself this is represented like this:

The Right Alt key still works like a normal Alt.

Notation that I made up6:

Two languages instead of four and one LED

I created two layouts, v6 the latin one with umlauts and everything else, and ruua, that contains both Russian and Ukrainian characters in the same layout.

Pressing the right Control key once changes the layout:

Having only two layouts means you never have to guess which one comes next or set up indicators in the taskbar. You just let your muscle memory automatically do its thing.7

But unlocking the laptop was still a pain. You don’t know the language you were typing in when you locked it, and things like i3lock don’t tell you the layout by default - and you never know if a wrong password is a typo or a wrong layout.

The grp_led option allows you to use keyboard LEDs as indicators.

Now anytime I’m typing in Russian or Ukrainian the Caps Lock LED is on, regardless of what is shown on the display. Pressing RCTRL changes the layout and makes the LED turn off, and you know it worked.

Custom modifiers defined in the layout itself

No xmodmap anymore! Caps Lock is now Ctrl, with Latch it becomes an Escape (and the former Ctrl button is a new modifier key Hyper_L, guaranteed not to collide with anything).

That took time to get right, the key was making Caps Lock a four-level key5, then we can define what happens to it with Level3/Latch/<LALT>:

For more, look into modifier_map8 and real/virtual modifiers9 on the Arch Linux Wiki. 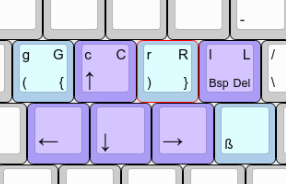 Shown in purple, directly in the right hand resting position:

Being able to quickly delete text with my ring finger without stopping to type to reach the backspace key feels as good as it sounds.

Left Alt as modifier key works very well for them - it’s easier to reach for my left thumb than Shift was for any finger ever.

Some redundancy and left-hand features

There are two additional Enter keys, one on Space and the other one under Escape. Both closer than the real one, and the latter needs only the left hand. (I found I need a left-hand Enter more often than any other.)

On that same tilde key there’s a Compose key too, which allows to type some exotic characters that are used too rarely to get their own key.

There is also more than one way to do slashes, this mostly has to do with old layouts I had and still remember if I’m tired or stressed.

After you read ArchWiki’s Precautions and preparations and assuming you need both the latin and cyrillic layouts:

For the full experience

If you don’t want to go all-out:

The sources, keyboard-layout-editor.com .json and the pictures are all available on Github. Pasting them below too for completeness and redundancy.

Custom keyboard layouts for the win

Tweaking to your purposes something as fundamental as a keyboard layout is strangely empowering. And adapting to a new layout is like learning a foreign language - if you did it at least once in your life, the next ones are much easier. Especially if it’s small things like moving a key, or just adding more symbols to the existing layout.

Wouldn’t recommend it to everyone, though.

One thing I would recommend to everyone without exception is switching the Ctrl and Caps Lock keys. It can be easily done on any OS, including Linux, where too it can be done without editing any layout files12.

Thank you for reading!